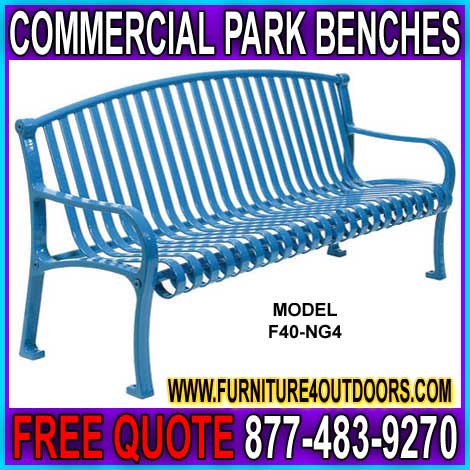 Commercial park benches are typically purchased by a group of people. These people can be part of a church, a school board, an HOA, or a municipal parks committee. Each individual in the group has something in mind for the community they serve. Some have a special person whom they wish to honor with a personalized park bench. Others want a definitively classic look reminiscent of a previous historical period they continue to idealize. Still, others want something new and modern, to show park visitors that the town is on the upward swing again after years of economic downturn and struggle.

With so many opinions at play, it is often hard for even close friends to come to a consensus about what they will buy. The fact that there are so many different types of commercial outside park benches can make it even harder for the group to decide, seeing as how there are so many choices for them to debate and so many ideas about which one is truly best for the community at large. If committees are not careful, they can argue themselves into gridlock that delays renovation while everyone else continues to sit on worn, splintered benches that have long outlived their usefulness.

Furniture4Outdoors recommends you take a community-based approach to buying commercial park benches. While every person has a right to an opinion, the likelihood that any one person can intuit what everyone in the town will like is very small. When the community begins to change and grow, it does so collectively. Signs of its new look take shape as it begins to recover and pick up speed in the new economy. Homes, churches, schools, and businesses all reflect the new influx of capital and people, and the town develops a new facade seemingly on its own.

Planning committees must pay attention to these changes if they are to choose commercial park benches that the community itself will appreciate. This is not as hard as it sounds, because it is simply a matter of perspective. Instead of sharing, debating, and voting on each personal opinion, committee members should go out into the community and listen to what people are saying about the changes taking place within the town. The most popular new stores, new housing projects, and new entertainment venues function as benchmarks for what people like and what they don’t like.

By paying attention to the architecture of these emerging new constructions, and by seeing which establishments draw the most people, planning committees can procure commercial park benches that compliment these structures and balance their facades with the natural environment. This amounts to what some might call a community guided purchasing, where public servants listen to the voice of the public and not the opinions in their head.