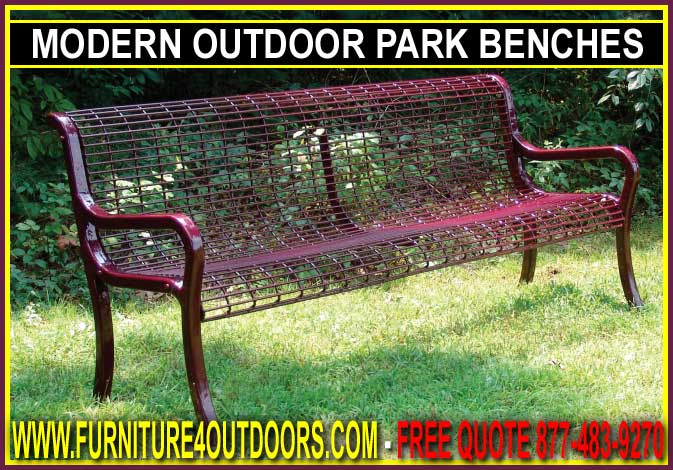 Modern outdoor park benches blend the contemporary with the recently historical. What we call the modern style emerged over 100 years ago, just after the turn of the 20th Century. As such, it conveys sufficient historicity to evoke memories of the “good ole days” of the roaring 20’s. Many small U.S. towns had their origins around this time, so even though the style is labeled “modern,” it also helps establish a sense of history relative to the recent past.

Small communities all over American are buying modern park benches for renovation projects focused on restoring the original town square and local business district. Many towns also use them for more than simple park benches. A good many of our customers are installing them along sidewalks in front of storefronts. Others use them for bus stops and restaurant seating. Other applications include municipal government buildings, the county courthouse square, local churches, and schools.

But what is it about the modern style exactly that makes it so popular? While nostalgia plays a role in the taste of older demographic, we see just as many Generation X and Millennial customers investing in this style. This indicates that the fundamental design itself—and not simple historicity—accounts for its popularity.

One thing you will immediately notice about modern outdoor park benches is their tendency toward minimalism. They have a definitively linear appearance that is based upon the geometry of a rectangle.

This simplicity makes them appropriate for a wide range of environments. We have installed these benches in several formal establishments that were known for a low-key, almost subdued atmosphere that the modern style suitably complimented.

In other applications, as mentioned before, these benches have proven exceptionally popular in urban renovations that reestablish a pre-1960s, 20th Century look. They have provided hours enjoyable seating for shoppers, playground visitors, and fishing buddies spending time along a local, municipal riverside park.

Modern outdoor park benches are frequently used to replace wooden benches that have deteriorated over the years. While it has taken a while for some towns to move away from natural wood to metal furniture, this transition is now happening more rapidly than ever thanks to new features that make these benches not only last longer but also make them look better than their wooden predecessors.

All of our benches are coated in a special material known as Thermoplastic. This material is moisture resistant, so it protects the metal against oxidation. It is also contiguously colored at the time of manufacture, so it requires neither painting nor repainting. To some extent, too, Thermoplastic is impact resistant and holds up much better than wood under normal conditions of usage. Its special constitution helps it resist UV light, so it will retain its color for many years to come.

Call Furniture4Outdoors.com now for a complete listing of all colors, sizes, and styles we have available.